Innovation is hard wired into the circuitry of all the smaller companies who attended the latest of our informal ‘brew and bytes’ meet ups – kindly supported on this occasion by Patent Attorneys, Withers & Rogers – at Factory 2050, the place where digital meets manufacturing.

“I was massively impressed and amazed that a facility like the AMRC, which can enhance SMEs, is on our doorstep,” says first time visitor to Factory 2050, Ciaran O’Shea, Director of Nprime, which specialises in instrumentation, telemetry, data capture and analysis.

“The work the AMRC does, and the technology it has, is second to none, globally. To have this expertise that SMEs can reference and draw on is unique,” said Ciaran, whose company has strong trading links with the US. “We see similar relationships in America, but I feel there is something special in the relationship that you are trying to build between manufacturing SMEs and the AMRC here in Sheffield.” “We see similar relationships in America, but I feel there is something special in the relationship that you are trying to build between manufacturing SMEs and the AMRC here in Sheffield.”

The east end of Sheffield based firm, established in 2003, is a specialised supplier of data acquisition and telemetry solutions to the engineering industry including Caterpillar, Jaguar Land Rover, BAE Systems and London Underground.

After the meet up, Ciaran was clear: “Without innovation we remain stagnant, we presently have three proof of concept projects, two people full time employed in new technology and 17% of our turnover is next generation technology, projects and proof of concepts.

“While Nprime is at the cutting edge with what we do, this engagement with the AMRC makes me feel we could access some of its R&D expertise to become more efficient and create solutions for the future. We are interested in sitting with the AMRC to have a kick off meeting regarding an R&D project we are launching shortly.”

“The AMRC – and Alan Lyons and his team as the liaison link – are essential to the Sheffield City Region SME community,” added Stuart, who is MD and owner of this innovative print finishing company which exports 85% of its production, including 50% to the US market.

Belinda Naylor, Business Development Manager at family-owned engineering and design consultants Webster Technologies, said: “The more we can learn and understand about Industry technologies the easier it will be to identify opportunities to integrate them into the business. Gaining confidence and knowledge about digital technologies through forums and networking events like this supports the adoption of smart technologies.

Belinda is keen to explore how virtual reality, telematics and remote monitoring could not only help her company understand more about the performance of its attachments, but also prove to be useful as a training and skills tool. “Virtual reality, using simulators as a way of learning how to operate equipment such as excavators is also a great way of engaging younger people with our industry,” she said. “We are interested in sitting with the AMRC to have a kick off meeting regarding an R&D project we are launching shortly.”

There was advice, too, for the AMRC. “It’s good to have more activities like this – events that are interactive, not overly technical. Anything that gives people an opportunity to get together; maybe something like a topic on innovation with attendees splitting into smaller groups during the event to encourage conversation and networking,” Belinda added.

For Alan Lyons this feedback is vital. “Our role is to introduce digital technology and digital tech companies to manufacturing, to show that by working together we can drive big improvements in own productivity and profitability not only at the level of the firm, but also across the regional and national economy. We are all on a learning journey. The more meets we have like this, the easier it will be to spread the word across the Sheffield City Region about the opportunities that are opened up when digital meets manufacturing.”

For Ciaran O’Shea, the opportunity to engage in a five-day free consultation with research engineers at the AMRC was an eye-opener: “I plan on making contact regarding this. Nprime’s expertise in bespoke measurement solutions and the AMRC’s facilities and expertise have clear synergies that could enhance what Nprime do.” Before his visit to Factory 2050 Ciaran confessed that he ‘thought AMRC was out of bounds’ seeing it as a competitor: but now he sees it very differently. “We will be in touch soon.”

If you are an SME who wants to learn more about how the AMRC can help your business make digital technology work for you, contact Alan Lyons at [email protected] If you are a digital/tech company that thinks you can support manufacturing get in touch via the Digital Meet Manufacturing page on the AMRC website at https://bit.ly/2Z8QWfO.

On 16th July, The Master and Mistress Cutler, Nick and Liz Cragg visited Rollem, based in Barnsley, to officially open the facilities as part of the celebration of Rollem’s 90th year in business.

In late 1929, the company’s founder Joseph Mellor set up a general engineering firm in Sheffield, South Yorkshire, specialising in brass casting. With the innovative approach that was to become a hallmark of his success, Mellor reversed his surname and christened his new venture ‘Rollem’. The company expanded into subcontract machining and developed first innovative products for the print industry, which were machines to crease and perforate the paper. With the typical machine, the Model S looking more like a 19th century Singer sewing machine than the machines of today. 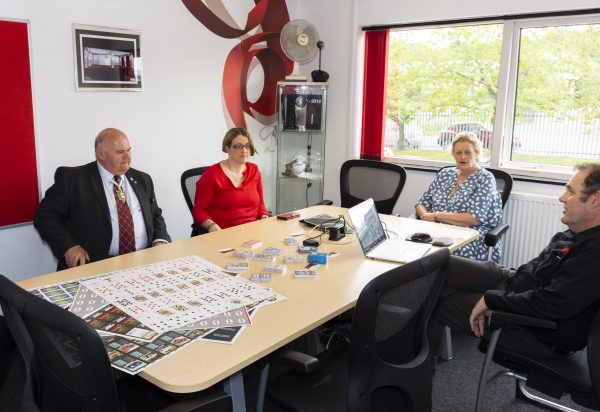 Today over 80% of the production is exported, turnover is around £3m per year and the company now employs around 40. Employees include engineering graduates, time-served skilled machinists, fitters and apprentices working and learning with Rollem, whilst studying at the AMRC-Training Centre in Rotherham.

Nick and Liz Cragg met with Managing Director, Stuart Murphy; European Sales Manager, Stewart Dyer; Business Support Manager, Rachel Murphy and Marketing Manager, Jackie Cook before having a tour of the facility, seeing everything from design through to assembly of the print finishing systems.

Nick Cragg, Master Cutler said “On behalf of Liz and myself, thank you and your staff for a marvellous visit to Rollem yesterday afternoon. What a product range and customer base you have – so many interesting stories and applications! Your staff were the real stars of the show. You clearly have some very experienced, loyal and gifted people working alongside you. What a privilege to be asked to open your new building.” 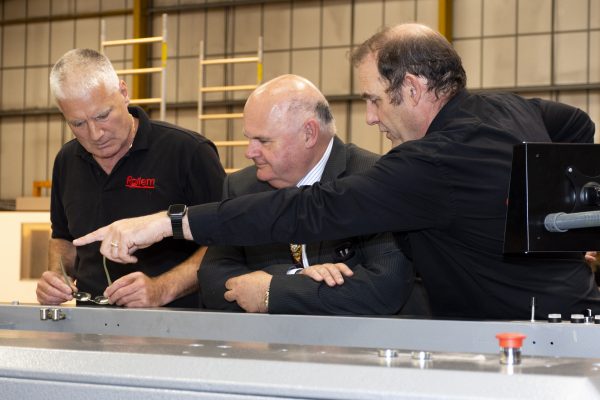 Bill Jones, Fitting Shop Foreman was demonstrating the recently refurbished Rollem SlipStream system. The system, originally built in 1989, is having an upgrade as part of a new service being offered by the company.

The machine enclosures, structures and mechanical parts can be fully refurbished, reconditioned or, in the case of moving mechanical components, completely replaced.

The first one of these refurbished SlipStreams is now very close to completion, and, even under close inspection, could be mistaken for a new machine. Shiny paintwork, gleaming chrome rollers, and new gears and drive belts are the outwardly visible indications of the care and attention which has been lavished on the project. 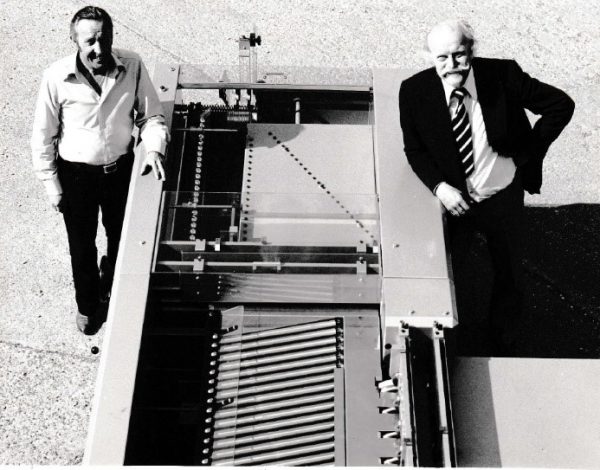 Stuart Murphy, Managing Director said “We are proud to celebrate our 90th year in business, we continue to build on our history with innovation in our products and services, investment in our facilities and a commitment to training and developing our people. The next 90 years is set to bring further innovation and growth.”

Rollem apprentice, Blake Goldworthy, talked to the Master and Mistress Cutler about his apprenticeship and studying at the AMRC-Training Centre in Rotherham. In 2018, Rollem took on 3 apprentices who are all studying towards Level 2 and Level 3 Mechanical Maintenance apprenticeships.